Auxiliary verbs Mock Test; Auxiliary verbs can be called a type or subtype of verbs to help the verb full fill the meaning it tries to convey. In other words, they are just some helping verbs. Actually, there are twenty-four auxiliary verbs in English grammar. They are divided into two; namely Primary Auxiliary and Modal auxiliary. Let’s have a look at them,

Be family consists of five auxiliaries mainly;” Am, Is, Are” which are in present and “Was, Were” which are past. All five of them gives the main theme “to be”

Have family consists of three auxiliaries mainly;” Has, Have” which are in present and “Had” which is past. All five of them gives the main theme “to have”

Do family consists of three auxiliaries mainly; “Do, Does” which are in present and “Did” which is past. All five of them gives the main theme “to do”

They are the rest of the auxiliaries. They don’t act as a main verb. They are namely: Will, Would, Can, Could, Shall, Should, May, Might, Must, Need, Dare, Used to, Ought to. 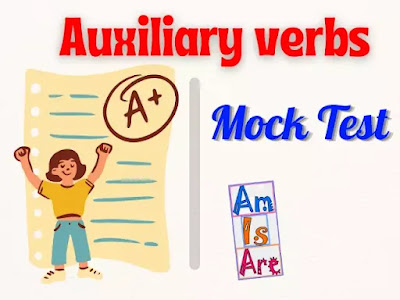 Hey, friend, we hope this Auxiliary verbs Mock Test is helpful to you. If you have any doubts, just put in a comment. Have a nice day.

Today, I am Looking For